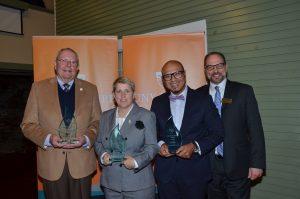 Emerging Leader Award – Erin Sullivan ’04, ’13
Erin Sullivan is a shop steward of the International Brotherhood of Electrical Workers’ Local 3 in New York City. A two-time graduate, earning a bachelor’s degree in Labor Studies and master’s degree in Labor Policy is also an adjunct member of the college’s faculty. In 2007, Sullivan was selected by her sisters and brothers for the Life Saving Award, the union’s highest honor, for saving the life of one of her union brothers. Sullivan was appointed chairwoman of Local 3’s mentoring program in 2011 and to date more than 2,200 apprentices have been paired with mentors. Seeing a need to bring labor history to the pockets of her students, Sullivan developed a labor history app, which gives students access to learn more about the history of the American labor movement from their mobile devices. In 2016, Sullivan was one of 50 women from across the country selected to attend the AFL-CIO Global Leadership Conference as part of the United Nations Commission on the Status of Women.

Community Impact Award – Emad Rahim ’02, ’03
Emad Rahim earned both his Associate of Science and Bachelor of Science in Community and Human Services and is currently an endowed college professor at Bellevue University. In his book, “Resilience: From Killing Fields to Boardroom: The S.A.L.T. Effect,” Rahim recounts his journey from birth in Cambodia’s killing fields to life as a youth on the violent streets of Brooklyn, N.Y. and his rise to success in business, community service and education. He was a Fulbright Visiting Scholar at Rochester Institute of Technology in Kosovo, holds an honorary appointment in social impact with Claremont Lincoln University and currently writes for IntelligentHQ.com, Forbes and CEO Magazine. In addition to his degrees with SUNY Empire, he went on to earn a doctorate of management from Colorado Technical University and completed his post-doctoral studies at Tulane University and Harvard University.

Distinguished Leader Award – John Corrou ’94
Since completing his Bachelor of Science in Business, Management and Economics in 1994, Corrou, a retired sales representative with Franklin International, one of the largest privately held manufacturers of adhesives and sealants in the U.S., and a veteran of the Army Reserve, has been giving back to SUNY Empire. Together with his wife, Jane, they established the Corrou Family Scholarship, which provides financial support to single parents furthering their education. He has been an active member of the Empire State College Foundation Board of Directors since 2007 and the college’s federation board of governors since 2004. Corrou currently chairs the foundation board’s program committee, is a past chair of the Empire State College Annual Fund and served as a member of the college’s 2013 presidential search committee. He has served as the president of St. Clement’s Roman Catholic Church Parish Council, and is long-time supporter of the Yaddo Garden Association, Saratoga Performing Arts Center and the Albany Symphony Orchestra. 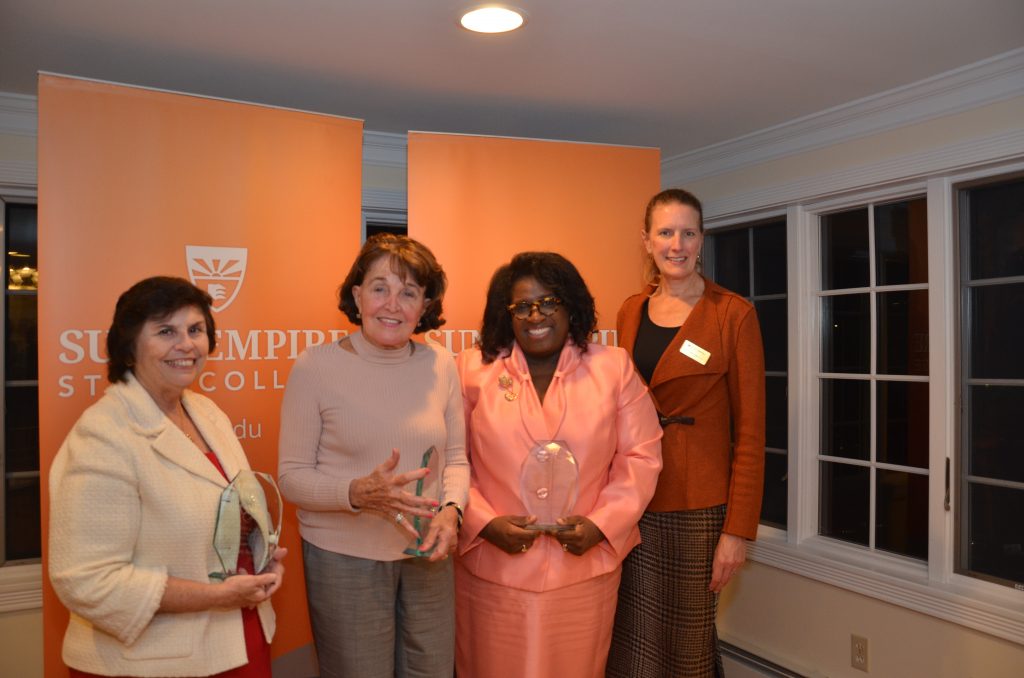 Emerging Leader Award – Catherine Roberts ’16
Catherine M. Roberts is the Senior Vice President for the Community Action Organization of Western New York, Inc. A recent alumna, she holds a Bachelor’s Degree in Business, Management and Economics and is currently pursuing her MBA at St. Bonaventure University. Catherine is presently a Health Leadership Fellow, a member of the Leadership Buffalo Class of 2017, a certified Low-Income Housing Tax Credit Specialist, a National Family Development Credential Trainer and a National Results-Oriented Management and Accountability Trainer. She loves to serve her community and is a proud member of the Junior League of Buffalo, Buffalo Chapter of the Links, Inc. and Board Member of the Girl Scouts of WNY. In 2016, she established the Be Committed Scholarship Fund for underserved students who exemplify a commitment to service and volunteerism.

Community Impact Award – Janice Mary Novello ’83
Celebrating her 50th anniversary in the field of education this year, Dr. Novello’s love of teaching science has inspired future generations of scientists and researchers to do the same. From her participation in the NASA Teacher in Space program to being invited to the White House as a Climate Science Key Educator, she has inspired thousands. Along with her husband of 49 years, Dr. Michael Novello, Janice initiated the Water Project providing clean water and health education for countries in need. She is the developer and co-chair of STREAM (Science, Technology, Religion, Engineering, Arts and Mathematics) for 24 schools while continuing on the Board of St. Mary’s Academy for Students with Special Needs. Beyond her education at Empire State College, Janice earned her M.S. in Education from Western Illinois University and a Ph.D. from University of Iowa. Janice is the current Florida Science Educator of the Year and is on the faculty of the School of Advanced Studies at the University of Phoenix.

Distinguished Leader Award – Susan Turben ’72, H’05
Susan was the second graduate of the college, completing a B.A. in developmental psychology/infant development in 1972. She went on to earn her M.Ed. in early childhood education and dual doctorate in special education/developmental psychology from Kent State University. The president of Turben Developmental Services, her entire career has been devoted to child development and parent education. She has pioneered a number of nationally and internationally known programs for infants, toddlers and children, as well as Head Start and other early intervention programs. Her community involvement is vast having served on many national and local boards. Among these are the Cleveland Museum of Art, the Cleveland Sight Center, the Institute for Educational Renewal, and the National Public Radio Foundation. The scope of her generosity and commitment to philanthropy cannot be overstated, particularly in her support of higher education. She served as the Foundation Board chair for the Learners First Campaign. Leading by example, she and her husband Jack endowed the first academic chair in mentoring at Empire State College as well as the Susan H. Turben Award for in Excellence in Scholarship. She was granted an Honorary Doctorate of Humane Letters in 2005.