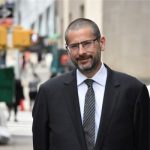 Why did you choose Empire State College? What do you think is the best thing about the college?
I thought SUNY Empire would allow me to achieve a college degree while working full time, maximize the credits I had accumulated from my prior studies, give me credit for what I learned through some of my life’s experiences, and allow me to study material that was of interest to me. I was correct.

How did Empire State College help you shape your personal and professional goals?
I had always wanted to be an attorney, even from when I was a teenager. I had mostly given up on my dream. SUNY Empire enabled me to get my academic career back on track so that I was able to go to law school.

What is your career highlight or proudest career moment to date?
I’m honored that the members of the NYC Civilian Complaint Review Board chose me to be the Executive Director of the Agency. I consider myself lucky to work with Board Chair Fred Davie, as well as the entire Board and staff of the CCRB.

What advice would you give to a current Empire State College student?
It took me ten years to graduate college. There were times that I despaired of ever graduating. I’m grateful to all of the people who helped me in those years, especially my parents, my brother, and my friends. I also owe a debt to Senator Schumer for taking a chance on me, allowing me to join the staff on his last congressional campaign and serve as the Deputy Finance Director on his first Senate campaign, even though I had not completed by college degree.

Why do you give back to SUNY Empire?
SUNY Empire helped me change the trajectory of my career, and truly, my life. I’m very grateful.