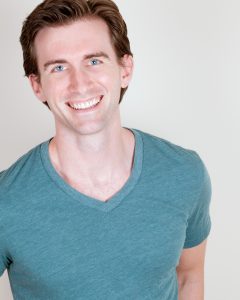 What three words best describe who and what you are?
Performer. Artist. Educator.

What inspired you to earn your college degree? What was your “moment”?
I spent four years in college immediately following high school, but an injury prevented me from graduating with a Ballet Performance degree. I left school and pursued a career in musical theater. After performing on Broadway, off-Broadway, touring the country, touring Europe, and performing in Moscow and Manila, I still had an unfinished goal of a college diploma. I set a goal when I was 38 to graduate by my 40th birthday, and I did it.

Why did you choose to attend ESC?
ESC came highly recommended to me by some of my peers in theater. I researched the school and discovered that all of my credits from 1996-2000 would transfer and allow me to craft my own degree program. The fact that I could attend college online which would allow me to continue working at regional theaters and on tour sealed the deal. I applied, got accepted, figured out financial aid, and started.

Who supported and encouraged you along the way?
I kept a huge secret from my parents by not telling them I re-enrolled in college to finish my degree…boy were they surprised on June 7th when they came to NYC thinking they were attending a surprise birthday party for me. In reality they were attending my commencement. So, they didn’t know. My boyfriend was the biggest source of encouragement along the way. He kept pushing me to read another page, write another paragraph, and understood when I needed to stay home and study. He supported me through the entire journey.

What, if any, obstacles did you overcome?
I conquered Math and Science! I thought Math and Science would be a huge obstacle since I hadn’t even thought about those subjects since high school. My mentor suggested courses that were of interest to me and that would have real-life applicability. We settled on Math for the Inquiring Mind and Human Nutrition. I learned Excel as a major component of my Math course and Human Nutrition – hello real world stuff – taught me a lot about the food we eat. Both were engaging courses and I not only passed both courses…I walked away with an A in both classes.

What advice would you give to a prospective ESC student?
Just do it. Apprehension was my biggest obstacle to actually going back to school. Fear of being an adult learner. Fear of not having enough time. Fear of not having enough money. Fear of not being able to finish…again. Fear of failure. When presented with the opportunity to sink or swim…most will rise to the occasion and swim their way to victory. It’s the same at ESC…just jumping in is the hardest part. Once you’re in, there are many programs designed to help you succeed. Working closely with my mentor, using the student services offered, opening a dialogue with my instructors all helped me succeed. Everyone at ESC wants you to succeed, and I felt that from day 1.

Why do you give back to ESC?
Because I believe in the mission of SUNY Empire. The school helped me achieve my goals, and I want the same for other prospective students.